In the world of Viking Magic

But what if the magic is back-to-front?

Oddo the farmer’s son gets into trouble for doing magic, while Thora the spellworker’s daughter is teased because she can’t. Using the power of runes to fix things up seems like a good idea, but the two friends discover there’s more to it than they thought. And now they face a dangerous sea voyage to a far-off place. Can they do it on their own? And what awaits them on their return?

Runestone is the first story in the spellbinding Viking Magic series; an ideal book for readers who enjoy a strong story and a richly imagined world.

Other titles in the series 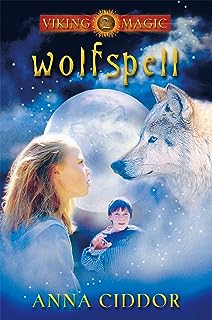 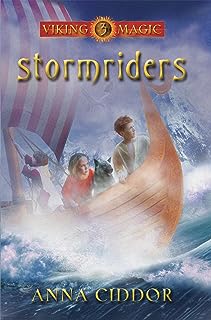 about the Viking Magic series…

The mixture of fantasy and Viking history make a fascinating blend…I must say it’s wonderful to have some quality Australian writing for this age group. (Beryl Siemionow, Bees Knees Books)

I’ve read both of the first 2 books in the series and loved them !!! … and here’s why :
* they are fun, uncomplicated stories that appeal to a wide age group
* being historical, they are educational, without having the subject matter being ramned down kids’ throats (Roberta Clark, Angus & Robertson Fountain Gate)

The books are excellent literature…cover universal themes that children can identify with:- sense of belonging to family and a group, the value of friendship, family acceptance, the difficulty in feeling different and accepting differences, finding inner strengths and abilities, self belief and self confidence. (Gail Godden, Collins Bookshop, Charlestown)

An easy read with love, friendship, loyalty, adventure and magic all inter-woven to make for an UNPUTDOWNABLE book!! (Edwina Serrao, Dymocks Macquarie)

Children will be captivated by the magic and mystery. (The Guardian, April 2002)

Fantasy for the teenage reader need not be escapist; rather it is at its most effective when presenting eternal problems slightly removed from modern reality. The protagonists of Runestone might be living in the Viking era, but they have similar conflicts of identity and vocation to the modern teen. (The Sunday Age, June 2002)

It may have taken Anna Ciddor thirteen years to leave aside nonfiction and explore the possibilities of fiction. However, it is all those years of research experience that merits Viking Magic as a very entertaining and absorbing fantasy series. (Magpies magazine, May 2002)

An unusual and extremely entertaining story for boys and girls. (The Star, New Zealand, July 2002)

This story embraces the concept that we don’t all fit the mould life grants us and that it’s ok to be different. (parentbytes.com)

The two hardy Viking children pitted against a crafty, callous, mean-spirited villain, play out their drama against the backdrop of a vast icy Norwegian wilderness, with just a mystical twist of magic thrown in for good measure! Highly recommended. (Magpies Vol 18 May 2003)

The second exciting installment in the adventures of Oddo and Thora…an enchanting book…a delight. (All Write! magazine May/June/July 2003)

Anna Ciddor has been able to successfully create a unique and original civilisation with its own people and culture, according to the facts about the Vikings that we know…Wolfspell can be described as a realistic struggle through adventures in an interesting, vivid and original world. (Courier Mail, 9 September 2003)

A great introduction to the fantasy world for younger readers…Drawing heavily on Norse mythology, Ciddor creates a vivid world and populates it with strong, sympathetic characters. (Australian Centre for Youth Literature Newsletter September 2003)

The final volume of the Viking Magic trilogy, Stormriders, will not disappoint….Anna Ciddor’s style is unobtrusively good, with lively dialogue, apt descriptions and figurative language. Following the tradition of fine historical fiction, the metaphors and similes are consistent with the world and experience of her Viking setting…Other attractive features are the…small illustrations at the beginning of each chapter…Highly recommended for readers from middle primary to lower secondary. (Magpies May 2004)

All the magic, the mystery and the adventure of Ciddor’s earlier tales are brought to life once more in a book which paints a rich portrait of the Viking World. An excellent blend of historical fact and magical fantasy, sure to appeal to 10 to 13 year old readers. (Aussiereviews.com)

An adventure that is exciting, entertaining — and, yes — funny (January Magazine June 2004) To read the on-line review, click here

In this spellbinding action packed book, the three companions see the strange land of fire and ice. There is heaps of new magic, strange lands to see and deep dark secrets could be unravelled. We give this book a 5/5 (Gold Coast Bulletin, 17 July 2004)

Stormriders goes straight into the story and it feels like you are there fighting their fights, hoping their hopes. It is steadily paced and impossible to put down. It is definitely worth being caught in maths reading. Oddo and Dungal are both very realistic characters. They forget, make mistakes and get upset but they are always true to their friends. Thora is always eager to help but can sometimes be bossy. As I read about her I felt as if I was her – talking, listening and dreaming. If I could talk to Anna Ciddor I would ask her one question “When’s the sequel coming out.” This is a spectacular read. (Young Australian Readers Awards, on-line review)